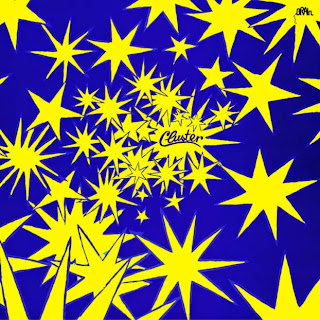 Dieter Moebius, Hans-Joachim Roedelius and Conrad Schnitzler formed Kluster in 1969 after the three had met at the Zodiak Free ArtsLab. This trio released three albums, Klopfzeichen, Zwei-Ostereiand Eruption. When Schnitzler left the group, Roedelius and Moebius became Cluster. They were joined by Conny Plank on their debutself-titled release in 1971. They continued as a duo thereafter but worked extensively with producer/engineer Plank until his death in 1987.

Cluster's first release, an eponymous debut in 1971 on Philips, was the first major label release for the musicians. Previous Kluster works had been small or private label releases with no more than 300 copies pressed and sold. This album and the 1972 follow-up were a
musical bridge between the avant-garde, discordant, proto-industrial sound of Kluster and the softer and more controlled ambient and rock sounds of their mid to late '70s albums. Cluster (later reissued as Cluster '71) has little or no discernible melody or beat. Allmusic review describes it, in part as "...a dislocating, disorienting meld of random space music, industrial noise, proto-ambient atmospherics, feedback, and soundwash..." The first album is also the only Cluster release on which Conny Plank is listed as a full third member of the band. He is credited as a composer and producer on Cluster II. Cluster signed with the influential Krautrock label Brain Records for their second release, a relationship which would continue through 1975.

In 1973 the duo moved to the rural village of Forst, West Germany to build their own studio. There Cluster and Neu! co-founder Michael Rother recorded two albums under the name Harmonia: Musik Von Harmonia in 1974 and Deluxe in 1975, both released on Brain. This new trio also toured and a new CD drawn from this period, Live 1974 was released on the UK-based Grönland Records label on October 22, 2007 and on the San
Francisco based Water Records label in the United States on December 11, 2007.

After the release of the first Harmonia album and a period on tour, Rother returned to working with Klaus Dinger and an expanded Neu! lineup in order to complete his contractual obligations. In his absence Cluster went back to work as a duo, releasing Zuckerzeit later
in 1974. Zuckerzeit sounds different from any other Cluster album, with clearly defined melody and beat and a rhythmic sound, at times approaching the Motorik style of Neu! Pitchfork Media places Zuckerzeit at number 63 in their "Top 100 Albums of the 1970s".

After the release of Deluxe Moebius, Roedelius, and Rother met in the studio again in 1976 and worked with Brian Eno. The resulting album, Tracks and Traces, was not released until 1997. Eno had been impressed with both Musik von Harmonia and Zuckerzeit before and had joined Harmonia once on tour in 1974, jamming with the group at The Fabrik in Hamburg.

In a 1997 interview, Hans-Joachim Roedelius spoke about the influence Rother had on Cluster's musical direction, on Zuckerzeit, and on subsequent releases:

"Michael, as well as Eno, gave a lot and had a certain focus regarding our common work... Obviously working with Michael changed my and Moebius' focus, I don't know if Michael got the same benefit from working with us as we did working with him."

The period from 1976–1979 was Cluster's most productive, with the four albums released during those four years receiving the most critical acclaim of any of Cluster's works. 1976 also marked Cluster's move to Hamburg based Sky Records. Their first release for Sky was  Sowiesoso, a highly creative album of gentler melodies recorded in just two days.

In 1977 the duo joined with Brian Eno for recording sessions at Conny Plank's studio. The first release from those sessions was the even softer Cluster & Eno. Guest musicians on the album included Can bassist Holger Czukay and Asmus Tietchens on synthesizer. The
association with Eno brought Cluster a much wider audience and international attention. The second album drawn from the Cluster & Eno sessions, After the Heat, released on Sky in 1978, featured a much wider variety of styles, including three tracks with vocals by Eno.
Holger Czukay again played bass on one track, "Tzima N'arki" which featured the vocals of the Eno track "King's Lead Hat" recorded backwards. Roedelius also began releasing solo material during this period, beginning with Durch die Wüste for Sky in 1978.

Cluster's 1979 release Grosses Wasser was produced by ex-Tangerine Dream member Peter Baumann and once again featured a wide variety of styles, including some of the most avant-garde material since the demise of Kluster, particularly during the middle section of the titletrack, which occupied all of side 2.