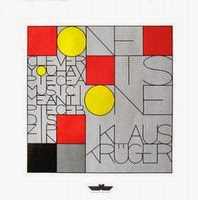 KLAUS KRÜGER (sometimes also mentioned Krieger, Kruger) is a German artist well-known for his collaboration with the pivotal band TANGERINE DREAM, during the late 70s, but whose overall career, as a musician and composer, is incredibly less-known. In fact, if his and Steve Jolliffe's short but special guest appearance in TD's 1978 album Cyclone was, at that time, on everyone's lips and was remembered, afterwards (the controversy of that album adding to the fame, though more on Jolliffe's side), Krüger's musical life after that point is interesting, in some parts unexpected, but rather obscure as well.

Nevertheless, Klaus Krüger is to be recognized as a prominent artist of the 70s Electro-Rock Berlin-scene, this sort of recognition stretching beyond the aforementioned collaboration. In fact, a bit of Krüger's contact with the scene is depicted even from the previous decade, being mentioned that, since 1962, he and TANGERINE DREAM's main founder, Edgar FROESE, have known each other. Besides, Krüger was a member of "Berlin's art and design circles". Klaus Krüger's drumming extended to influential resorts, by developing his own drum sets and pioneering the use of polyester drums.

In 1978, Peter Baumann leaves TANGERINE DREAM, so Cyclone was also a search for new members, who implicitly brought a new sound to the music. Krüger's drumming can be distinctively heard through that set of compositions, as much as Steve Jolliffe's vocals strike. Krüger's collaboration, that same year, also extended on Edgar Froese's solo album Ages, though perhaps not so much on the drumming side as on electronic sampling and sequencing. Krüger is credited to have also played on TD's next album, Force Majeure, released in 1979. The collaboration with TANGERINE DREAM ends, anyway, in that year, Krüger's next role being of a totally different kind, as he was invited as a guest musician in Iggy Pop's punk supergroup for his album Soldier, along (ex-)members from Sex Pistols, Ivan Kral and XTC. Krüger's bond with TANGERINE DREAM could have resurfaced to a new and special chapter in 1992, when he was officially announced to be the guest drummer in the band's US Tour, but it actually never happened.

Klaus Krüger's focuses on solo music during the 80s, releasing One Is One and Zwischenmischung in 1981, respectively 1982. On the latter, Manuel GÖTTSCHING, from ASH RA TEMPEL/ASHRA guests on two specific tracks. Both were compiled and re-released in the 1989 compilation Collection. These works remain, overall, of a rare kind, being however, in the same time, the best way of discovering Krüger's personality, skill and thinking. The style of this music differs consistently in comparison with the artist's merits from the previous years, a reason for which everything mildly suggests a (very) late puncture of Berlin-school converging (and convenient) synth art. The two albums present variety and short-timed fusion, whilst not stretching with the electronic instrumentation past Moog- or Arp-based sounds. The analogue shape of what Krüger developed as an electronic expression evolves into space, electro-pop, New-Age or simple synth programming, resembling occasionally TANGERINE DREAM, Jean Michel JARRE or KRAFTWERK. Klaus Krüger's global taste for melodies, artificial measures, soft experimenting and sound filling is rich.