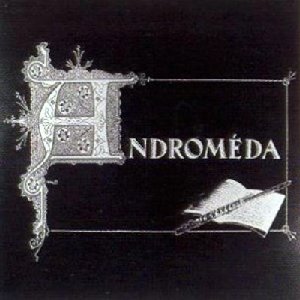 Not to be confused with the Heavy/Psychedelic Rock group of the same name from Köln, this lesser-known Andromeda group came from Berlin and was around since late-70's.It consisted of guitarists Rainer Lingk and Bernd Jahnke, keyboardist Thomas Lüdemann, bassist Alex Hensel, drummer Rainer Bergmann and multi-instrumentalist/singer Karl-Heinz Engelhardt.Their self-titled debut was a private press back in 1979.

Andromeda had quite a versatile sound, clearly influenced by the major Heavy/Kraut Rock bands like ELOY, JANE or even Austrian EELA CRAIG, but definitely with a touch of their own.Their style consisted of short- and mid-length tracks, somewhat split between guitar-driven instrumental sections and the passages led by the performances of Engelhardt on flutes, saxes and harmonica.Vocals are both in English and German, quite decent to say the least.The arrangements are pleasant with no show offs with the band prefering to deliver memorable compositions than complicated material.Inspirations come from a variety of fields: Psychedelic Rock, Symphonic Progressive Rock, Folk and Heavy Prog with some great dual guitar parts in evidence along with worthy flute-led passges, much in the vein of JETHRO TULL in the raw parts or GENESIS in the more delicate ones.On the other hand the offerings are pretty safe in general with little surprises and the lack of some killer musicianship is obvious after plenty of listenings.

Good, well-played but rather secure Progressive/Art-Rock from these Berlin musicians.Andromeda's debut is likely to please all fans of typical German Kraut experiences, who also like some nice melodies thrown in their music.Overall recommended.