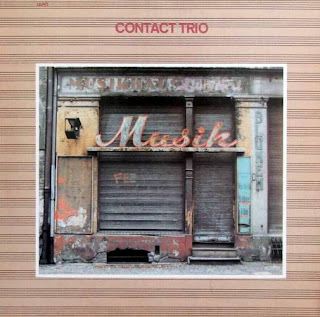 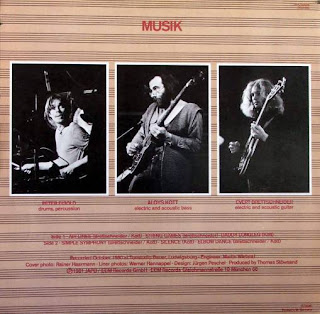 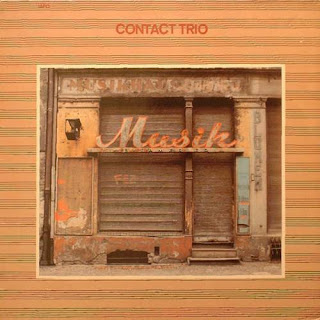 On the more avant-garde end of jazz-rock, Contact Trio were an unusual combo, drawing on the new forms of jazz as developed by Wolfgang Dauner in the 1960's and mixing in a bit of spaciness and ethnic flair, sometimes akin to Dzyan, Giger.Lenz.Marron or Eberhard Weber.
Their debut album DOUBLE FACE was much more restrained and ethnic spiced than their better-known later LP's, which was quite a surprise, as Evert Brettschneider was working in parallel with the prog-fusion band Prosper, where he adopted a more vibrant John McLaughlin style. Their later Japo label releases were moody and schizophrenic, at the darker end of ECM Records genres, with a penchant for experimentation. Especially enjoyable is NEW MARKS, which hints at the later works by Dzyan, with Jüllich's percussion very much in the vein of Peter Giger.
With new drummer Peter Eisold joining in 1980, the mood of the band changed somewhat to a more spiky agile fusion. The live recording from 1983 presents them as a much more aggressive jazz-rock combo.
Eisold went on to Noctett, and formed the trio Blue Box in 1985, along with Rainer Winterschladen and Aloys Kott (albums on Enja), he worked in numerous other projects and also established the drum group Batterie!