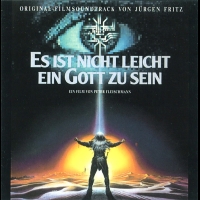 Though sometimes quoted nonchalantly as the German Keith Emerson or Rick Wakeman, the former Triumvirat leader Jürgen Fritz may indeed have been a phenomenal keyboardist in his early days, yet he has been nowhere near as prolific as his British counterparts.
He has done some production work (nothing notable), and featured as a guest with Satin Whale, Tanned Leather, Helmut Koellen, Gänsehaut (two albums), Trude Herr (a German pop singer), Hollywood, and even with Eric Burdon, but not much as a soloist.
Apart from some film and TV soundtrack work (which seems to be unreleased), we only know of the one actual solo album, which is also a film soundtrack, a computer music opera, totally overblown conceptually, intriguing for the very pompous title "Hard To Be A God" it reminds of some early Rick Wakeman instrumental works, but with a more modern instrumentation. After this, he worked in the duo Millenium.

Early Triumvirat (up to 1976) are among my favorite prog / Kraut albums. Was not familiar with any of these related releases (Jurgen Fritz solo, Jessica, Zomby Wolf, etc)...going to give these other bands a listen...thanks for sharing!