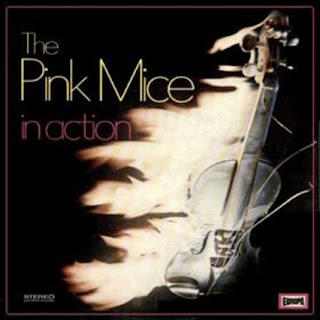 The Pink Mice is a German band of the early 70's clearly Symphonic and often accused of being clones of ELP, something that is not accurate, they were close to being clones of TRIUMVIRAT (Triumvirat is also known as The Rat, so the connection between Mice and Rat is easy to understand) in other words they were almost clones of a so called clone of ELP.

Some people may ask how they could follow TRIUMVIRAT if THE PINK MICE released their debut album in 1971 and The Rat in 1972, the reason is simple, TRIUMVIRAT was formed in 1969 and was already popular in Germany plus they had a lot of radio airplay with a 45 RPM released in January 1971 containing the songs "Dancers Delight" and "Timothy"..

But THE PINK MICE history gets more peculiar, their original lineup consisted of The keyboardist Peter Hetch, Peter Hesslein (Guitar & Vocals), Dieter Horns (Bass & Vocals) and the drummer Joachim Rietenbach is the exact same lineup of an already popular Hard Prog band called LUCIFER'S FRIEND but without the British vocalist John Lawton, seems that the members of LUCIFER'S FRIEND wanted to go for the Symphonic sounds with exclusively German members instead of the aggressive rock music created with Lawton as a member.

Their albums are clearly influenced by Classical Music and they don't hide this fact, the titles of the songs include among others "Capriccio Italien op.45", "Brandenburgisches Konzert Nr.3,1.Satz", "For Elise", Sonata for Klavier, etc.

During their short career they released two excellent albums "In Action" (1971) and "In Synthesizer Sound" (1972) both are highly recommended and a must have for any Symphonic proghead that loves Synth based albums, if you need more historical info about the band, check the page of LUCIFER'S FRIEND in Prog Archives.