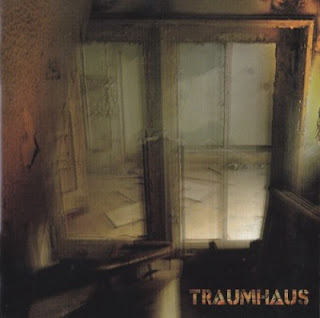 TRAUMHAUS is a German group that evolved out of a mid 90s outfit called ZWEEBACK. The group's name translates to "House of Dreams" and their music combines hard rock with a healthy helping of atmospherics. While the style looks back to many German bands of the 70s and 80s, their use of angular melodies and their native tongue draws valid comparisons to one in particular, ANYONE'S DAUGHTER. NOVALIS and GROBSCHNITT might be other reference points, although TRAUMHAUS is somewhat more rhythmic. The band consisted of Frank Woidich - Organ, Synthesizer, Backing Vocals, Bernhard Selbach - Guitars, Backing Vocals, Bass Pedals, Michael Dorniak - Backing Vocals, Bass, Drums, Alexander Weyland - Vocals, Synthesizer, Piano and Nina Weyland - Guest Vocals.

Up until now they have only one release, their self titled 2001 debut. It consists of 8 songs over 5 minutes long, one of which is an 18 minute epic.

With the understanding that the band's sound had not yet fully developed on their first album, and future releases seem more and more doubtful, TRAUMHAUS is recommended to those who like German progressive rock with heavy guitars and bass balanced by symphonic keyboards.