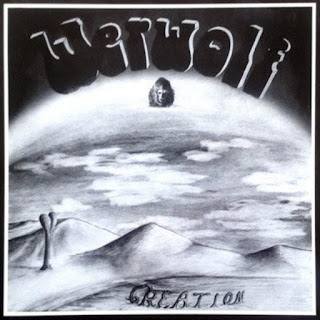 WERWOLF (WEREWOLF), a band from Olpe in the Sauerland in Germany, was formed in 1970 by Peter Besting (born 2/4/1951 in Olpe) on drums and vocals, Hartwig Kugoth on guitar and Peter Lorenz on bass. Before, Peter Besting had already been playing for a year in the band Age. The band name had no deeper meaning but was simply a reference to STEPPENWOLF whose recordings the original member of WERWOLF appreciated a lot. They bought their first large PA equipment form the SCORPIONS' mastermind Rudolf Schenker in the early seventies. After rehearsing in a self-built and soundproof wooden hut with freezing temperatures during the winter, WERWOLF changed their rehearsal room into Peter Besting's newly built house in Wenden in 1972. In the course of time other musicians joined the band: Jürgen Göckler from Olpe on keyboards and as background singer, Michael Schlimm from Olpe on saxophone and on cross flute and singer Ellen Wiederstein from Attendorn. When Peter Lorenz quit, Hartwig Kugoth played double-neck guitar combining bass strings. Similar to the DOORS, Jürgen Göckler played the bass accompaniment on the keyboard whenever Hartwig Kugoth played the high notes. With this line-up, WERWOLF recorded a thirty minute demo tape in the Studio Eden in Lüdenscheid in May 1979 in order to gain a record deal, but without success. After several changes of the line-up, WERWOLF independently released the album "Creation" in 1982 in a limited edition of 1000 copies with Peter Besting on drums, Gerd Heuel on guitar, Burkhard Huckestein on bass, Wolfgang Unthan on keyboards, Gitta Löwenstein as singer and Jürgen Göckler as occasional guest keyboarder. WDR and SWF presented the album which is a collectors items worth more than USS50 now.

In 1992 "Creation" was reissued in the USA on CD with a new cover artwork (the Laser's Edge LE-1013). Having been a collector's item before, lately after that time a wider reputation followed and the original records sold for big bucks. Then finally, in 1997, the three tracks of the demo tape saw the light of day and were published by Garden of Delights in Germany (PGCD 03).

In the mid-eighties WERWOLF split after they had started releasing some songs in German language. In total WERWOLF performed about 150 gigs, among them as support acts for BIRTH CONTROL, ELOY, GROBSCHNITT and the FRANKFURT CITY BAND, some of which are available as soundboard recordings.

This CD-edition now contains the complete record "Creation" of 1982 as well as all three tracks of the demo tape recorded in 1979. The cover art is the American version painted in 1992 by Lee Gaskins. He renewed some details for us. The mastering was done by Bob Katz in Florida.
From the site:
http://www.blackrills.ch/Werwolf.htm  The band split and reunited in 2010 with the original founder Peter Besting, the original guitarist Gerd Heuel and new musicians. The name was changed to WEREWOLF ART ROCK and the album "Mystic Land" was published in October 2014.

The members of this band weren't very trendy for 1982 Germany, more like 10 years behind the times. But that makes the music even more unique for its time...maybe the last good album of the original Krautrock era?